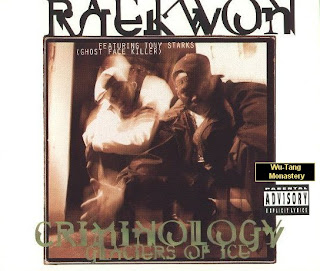 Back in the Summer of 1995 I was sharing a flat with one of best friends in South East London and spending too much time playing Mega Drive and too much money on records. One of the most important records I bought that Summer was the first 12" from Raekwons' classic debut Only Built for Cuban Linx. The 12" had Criminology on the A side and Glaciers of Ice on the B side. Although Criminology is a strong track that works well with the rest of the album Glaciers is my favorite track on this 12" and also my favorite Raekwon track overall. On Glaciers we see the start of the orchestral sound that would eventually be the sound that Rza perfected on Ghostface's album and on the masterpiece Wu-Tang Forever. 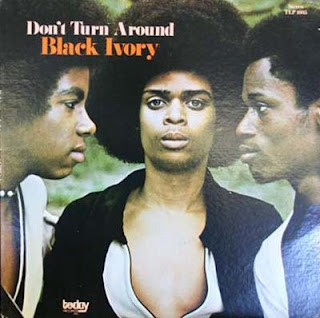 I had first heard Glaciers in a late night smoking sessions with my friends at the time and had been totally blown away by Rza's layered production. Rza had been tearing up the East Coast for a couple of years with his dirty and raw style of production but the styles he brought to the Cuban Linx album was totally different to what we'd heard from him before. He utilized a wider range of samples drawing on jazz, soul, funk, rock, pop and soundtracks for what would become the highlight of Raekwon's career. 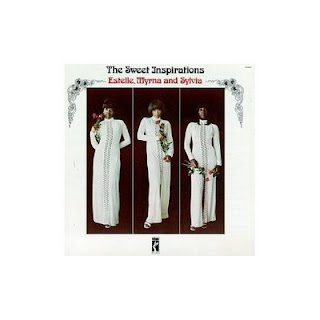 For the track Criminolgy he sampled two tracks Black Ivory's "I keep asking you Questions" and The Sweet Inspiration's "Why Marry". The Black Ivory track is taken form their 1972 album "Don't turn around" and its easy to hear what Rza took from this track. The Sweet Inspiration's track is a fantastic tune asking the question Why Marry?. This song was taken from their 1973 album Estelle, Myrna and Sylvia. The sample is immediately recognizable and works well with the Black Ivory sample to create the beat behind Criminology. 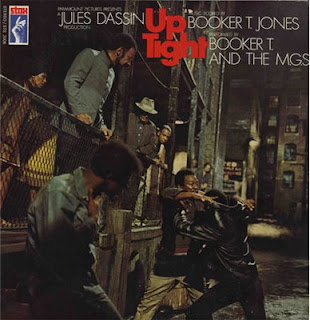 For Glaciers Rza tapped the legendary Funk artists Booker-T. The track is slower than the usual Booker-T joint and its called Children Don't get weary. it is taken from the 1968 film soundtrack Uptight, which is quite a rare piece of vinyl. Rza has lifted the bass-line from this and thrown a load of what sound like Harpsichord strings at it and made what is easily Raekwon's best song ever. Check the link below to hear the 12" and samples.
Glaciers
at October 24, 2008 1 comment: 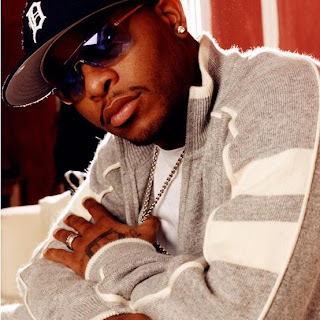 What do you get when take Hip Hops best producer, a sick lyricist and a classic David Axelrod song ? You get Royce Da 59's new banger "Shake this". As you all know Royce is a dope Detroit lyricist who proved his skills in the same clubs that birthed Eminem in the mid to late 1990s. He dropped has number of dope 12"s, a few albums and mixtapes since then. However his best work has always been with Premier behind the boards and this track shows this again. 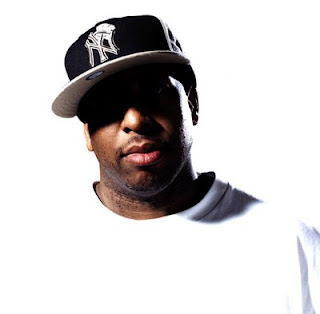 Premier always gives Royce dope beats that allow him to show off his mic skills to their full extent and this track is no different. Its an up beat track that has Premier returning to his David Axelrod collection. The Axelrod track he samples is from his 1968 Capitol release "Songs of Innocence" album and is called "Holy Thursday". Premier has samples Axelrod numerous times in the past as have DJ Shadow, UNKLE, Pete Rock, Dre and many more. 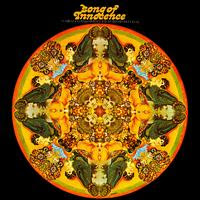 David Axelrod is a very talented Jazz, Funk and Soul producer who worked mainly on Capital records from the early sixties onwards. He made his name producing for Lou Rawls but went on to produce for Cannonball and Nat Adderley, The Electric Prunes, Letta Mbulu and David McCallum. He also released a number of solo albums that were also very successful. Check out the new Royce Joint and the track sampled by Premier to make it by clicking the links below.
Shake This
Holy Thursday
at October 09, 2008 4 comments: 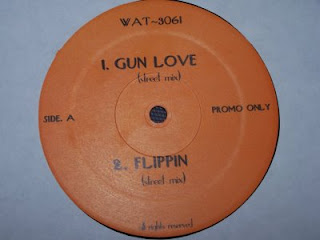 Back in about 1999 I picked up a Bootleg Mobb Deep 12" from London's now closed down Mr Bongos. I've always been partial to a nice bit of Havoc and Prodigy especially if its Havoc behind the boards. I like the dark ominous production style that Havoc fathered and their style of morbidly threatening raps has always cheered me up. At the time I had only heard 3 the Hard way and Gun Love on a couple of mixtapes and had liked what I heard despite the wack DJ shouting all over the tracks. So of course being a big QB fan I had to grab this bootleg 12"
The track Gun Love is about a love affair and how it lasts through the various ages of Prodigy's life and how much this love means to him. I know what your thinking this doesn't sound like the usual Mobb Deep subject matter but the love that he's talking about is as the title indicates his Gun Love. I know this sort of thing has been done before by a few other decent MCs but Prodigy drops the rhymes with such dry humorless lyrics that give this track its unique flavor. 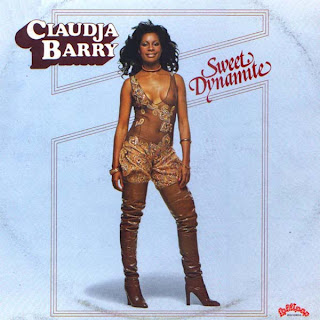 The beat is made up a of a Claudja Barry sample taken from the track Love For The Sake Of Love from her 1976 album Sweet Dynamite. Claudja Barry was at one time a member of Boney M and was a well respected Disco artist in the mid seventies. The beat isn't the usual dark and suspenseful Havoc produced joint but a rather up beat and almost happy joint, which I guess is Mobb showing how ironic they can be. 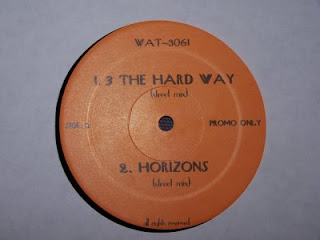 The rest of this bootleg is taken up with some rather unusual tracks. Flippin is on the A side along with the above mentioned Gun Love and is a pretty run of the mill Mobb track with what sounds like Big Noyd dropping some lyrics but as its a bootleg I can't be sure as there is no credits. The first track on the B Side is 3 the Hard way which is a dope track. It has a cool guitar loop with lots of static over it. Its a little short for my liking but I'm sure there is a full version out there somewhere. Once again I think I hear Noyd on this but I'm not 100% sure. The last track on this is terrible it has Mobb Deep rapping over a an upbeat piano loop that by the end of the track turns into Pavarotti's Nestle Dormer, I think with Pavarotti singing included. Its so wrong for so many reasons and its abruptly cut short.
Check these out and the Claudja Barry sample by clicking the link below
I used to let Noyd hit her
at October 03, 2008 7 comments:

Lupe, Q-Tip and Pharrell on the remix tip 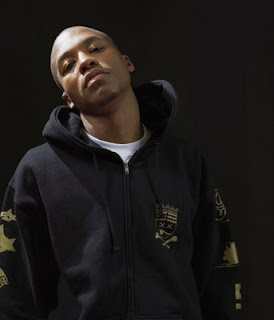 Last Year Lupe went and pissed off a whole lot of hip hop heads by saying he had never even listened to Midnight Marauders and that he was more of a West Coast Gangsta man than an East Coast Backpacker, fair enough not everyone gets to listen to every classic album when they dropped. But Lupe then went on to perform a cover of Electric Relaxation at the VH1 Hip Hop Honors show and he messed up the Lyrics, then he made a few posts about how he was asked to do the track by Q-Tip and then Tip refuted that on Hot 97. The whole thing seemed to get a little bit silly in my opinion.
Now months after what became known as Fiascogate we have a remix of the track Paris, Tokyo from Lupe's very underrated album The Cool. The original version of this was produced by Lupe's boy Soundtrakk and I think he's behind the boards on this one too as the beat is very similar to the original. 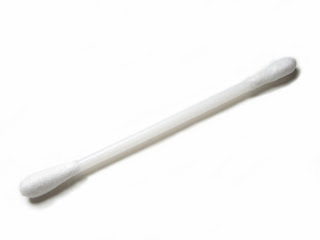 The beat is mellow and laid back with some nice drums and a cool keyboards loop. Pharrel does his kinda singing kinda rapping thing with some nice soulful vocals from Sarah Green. But what makes this joint special is the appearance of Q-Tip and the dope verse he drops which obviously means there is no ongoing beef or any other madness. I for one like this joint its chilled, a little reminiscent of Tribe, its the kinda beat I like to hear Tip over and I don't think the Live at the Renaissance is gonna have any beats like this so its a nice little blessing. Check the link below for hear the track. By the way anyone know if Tribe are still pretending that they'll try and get back into the studio anytime soon?
Paris Tokyo remix
at October 02, 2008 No comments: