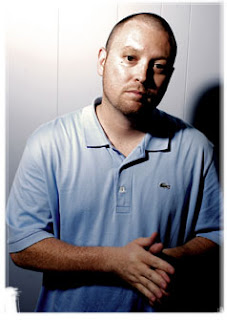 I first heard Jake One's production skills on an unreleased remix of MF Doom's Hoe Cakes from a free CD called MM..Leftovers, that was given away with pre orders of Doom's now classic MM...Food. His spin on Hoe Cakes was dope in a more laid back way than the original was. He flipped the track using a crisp snare and a singing sample looped up all the way through it but still keeping the "Super" vocal sample every so often throughout the track. 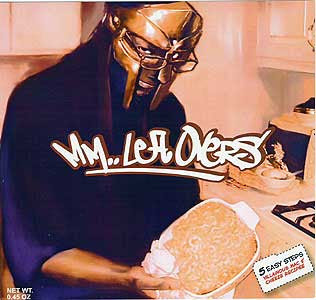 The next I heard from him was on De La Soul's extra dope Grind date, on which he produced two tracks; Days of our Lives with Common and Rock Co.Kane Flow with Doom. Both tracks are dope and at the same time different to the usual type of track that the Plugs rhyme over. 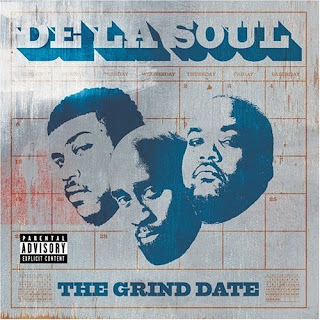 Jake One has produced tracks for a diverse range of Hip Hop artists including the Strange Fruit Project, Vast Aire, MF Doom, E-40, John Cena, Planet Asia, Nas, and 50 Cent. Well now Jake One is about to drop his own album and the list of lyricists on it is one of the most interesting line ups I've seen in a long time. The album is called White Van Music and the track list is below; 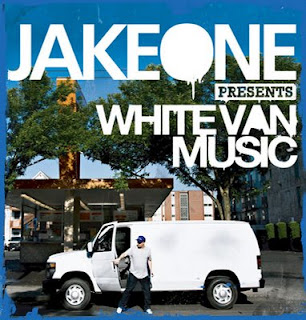 Now that is a sick line up, now only does it include hardcore underground emcees like MF Doom, Casual, Brother and Royce but then you've got people like Busta, Freeway, Posdanous, Prodigy and M.O.P. The Line up alone demands that this album be purchased not too mention that the beats are dope too. Jake One's style is hard but at the same time mellow and melodious. Below is a link for Jake One's Hoe Cakes remix and Gansta Boy featuring M.O.P. taken from White Van Music.

Email ThisBlogThis!Share to TwitterShare to FacebookShare to Pinterest
Labels: Hip Hop, Jake One 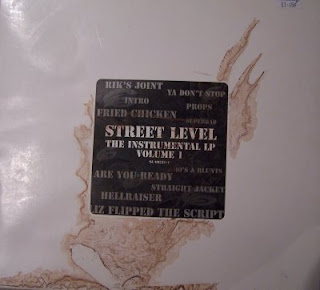 So earlier on today I was taking my daughter to an optician's appointment and was 10 minutes early so I took a look in the Charity shop next door to the Opticians. I find it hard to walk past a charity with vinyl in it without taking a look. The Charity shop was a Cancer relief shop and had a couple of rows of vinyl at the back. So I got diggin' and found the usual collection of Simple Minds LPs, strange German classical albums and KLF EPs but then I came across a few hip hop records. The first was a John Forte album so I just put that one back in the rack along with the Wyclef 12" next to it. Then I came across something really surprising The Beatnuts Street Level instrumentals which according to the label features to unreleased instrumentals . As you can see from the photo above someone has at some point in the life of this vinyl spilt some coffee or hot chocolate on the cover but other than that its in perfect condition and cost just £1.65. 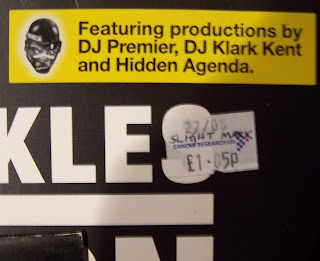 The second gem I found was Freddie Foxx's second album as Bumpy Knuckles Konextion for £1.05. Any piece of vinyl that has two DJ Premier produced tracks and a Clark Kent one for under £2 is a serious bonus. I've always been a fan of Freddie Foxx and when you put his threatening rhyme style over dope beats you simply can't go wrong especially when it comes to Premier. 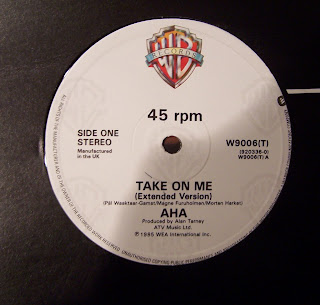 I also picked up the 12" of Aha's Take on me with the extended version on the B side but thats another story. Check the link below for The Beatnuts instrumentals. 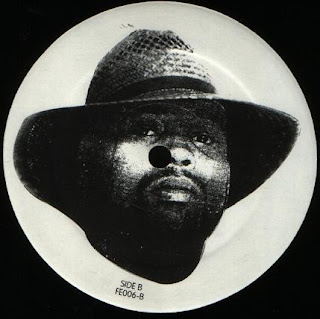 Lord Sear first came to prominence on the infamous WKCR radio show The Stretch Armstrong and Bobbito Show which ran for nine years from 1990 to 1999. Since then Lord Sear has gone on to do a number of other shows and now has his own show on Shade 45 on Sirius Radio every Friday called the Drunk Mix from 10pm to Midnight. Lord Sear is a dope Dj but in the 90s he dropped the odd piece on vinyl that although hard to find are worth picking up if you ever see them. 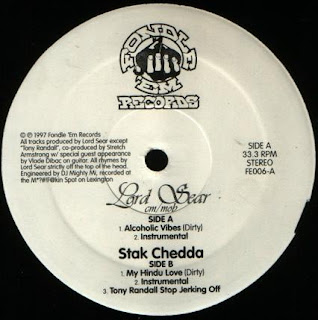 The First 12" he dropped was on the Legendary Fondle Em label in 1997. The A Side was called Alcoholic Vibes and the B Side was my Hindu Love. Lord Sear Produced the Track and Mighty Mi engineered them. Both tracks are fun and have pretty decent beats backing up Sear's funny lyrics. the first as you might guess from the title is about Sear's love of Alcohol. the second track finds Sear going into the details of his love for a lady Hindu faith. 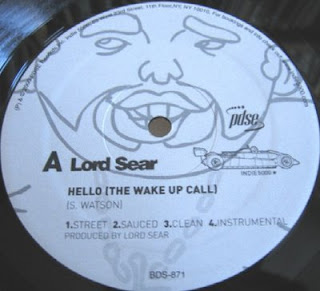 The second 12" he dropped was in 2000 and was on the Buds label which was dropping a lot of dope underground and obscure 12"s around the late 90s. Again Lord Sear produces a couple of humorous tracks, one in particular about the problems of bad breath is very funny. Both have dope upbeat samples and are worth checking out. 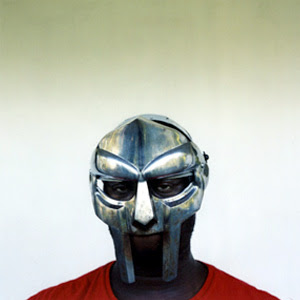 MF Doom has been a one of my favorite artists since I first heard him as part of KMD on their classic Mr. Hood back 1991. But like a lot of people I really started to to take notice of his production when he dropped Operation Doomsday in 1999. Doom always seems to use obscure samples as the basis for his production; strange film scores, obscure TV themes and long forgotten dodgy 80s soul tunes.
In the past I have only managed to track down a few Doom samples, on vinyl that is not the internet. But on a recent trip to a second hand record store in one of the many markets in Dublin's city centre I managed to find a couple of little gems. 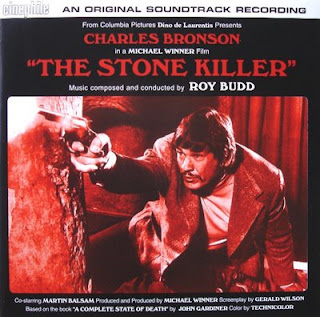 The First was a copy of Roy Budd's film score to a Charles Bronson film called Stone Killer. Roy Budd is an English film score composer who is probably best known for producing the film score to Michael Caine's Get Carter. I picked the record up because I have a copy of the Get Carter soundtrack which is damn funky and they were only charging about €12 which seemed like a bargain to me. When I got it home and played it I was not disappointed its a strong soundtrack full of suspenseful tracks and about half way through the main theme of the soundtrack there is a dope MF Doom sample which he used on the King Geedorah album on the track LockJaw (A tip of the hat to Marvel's In-humans, comic heads know what I mean). Its a short track but Doom uses the sample to make up the heart of the it and its dope. 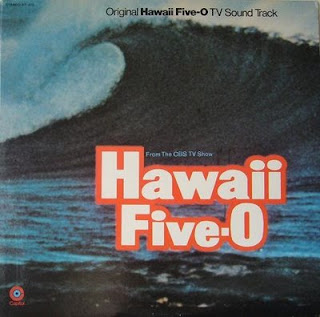 The second record I got was the soundtrack to Hawaii 5-0 by composer Morton Stevens. I got this one for €10 and figured it was worth owning just for the main theme to the program. Morton Stevens has been used by a couple of other hip hop artists including Fat Joe and OutKast. But the track that I like best on the Hawaii 5-0 soundtrack was used by Doom on the Madvillain album with Madlib. The track Doom used it on is the Illest Villain which is another short track (Doom seems to like to keeps his tracks short from some reason) but again he uses the sample well to create another signature Doom track. Check the tracks and the tunes he used them on below. 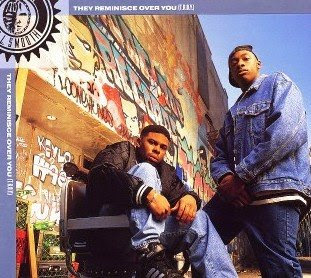 So there was a lil competition on one of the messages board I frequent, Phil Flava and the comp was to make a lil compilation of early 90s tracks but you had to include the following;
- 12 tracks total
- 2 diss tracks (can be obscure but you must provide the reference)
- 2 remixes
- 1 Westcoast track
- 1 Midwest/Southern/European/Asian or Canadian track

So I put together this lil compilation and I figured I'd post it up here for anyone else to download if they wanted, heres the track list.
01-Big L - Devil's Son
02-Pop Da Brown Hornet - Lets go the Lap
03-Sham and the Professor - So-Low-Ist (Kenny Dope remix)
04-Dre Dog - The Ave
05-Tim Dog - Fuck Compton
06-3rd Bass - Brooklyn Queens (Prince Paul Remix)
07-K Solo - Tales from the Crack Side
08-Above The Law - Freedom of Speech
09-King Tee - 09 Black Togetha Again (Marley Marl Remix)
10-Naughty by Nature - 10 Its on (Beatnuts remix Sir Mixalot diss)
11-Hijack - The Badman is robbin (UK)
12-The Wascals - Class Clown Fatlip remix