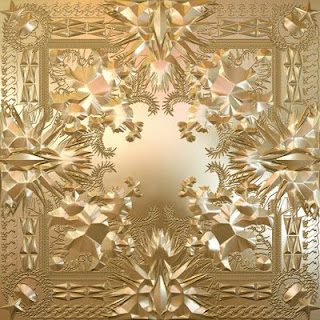 Jay-Z and Kanye have been talking about this project for quite sometime now and its finally here. Originally intended as a five-track EP by the duo, Watch the Throne was revealed by West to be a full-length album in an October 2010 interview with MTV. At the time he said that they planned to record in the South of France. However strangely enough production for the album began in November 2010 in Bath, England (of all places not exactly what I would call a Hip-Hop Hotspot ) and continued during available times in Jay-Z's and West's respective schedules in Australia, Paris, Abu Dhabi, New York and Los Angeles. In a number of interviews, Jay-Z said that they often recorded in hotel rooms and that the album went through three iterations, as he and West had scaled back from their original musical direction for the album. Although originally rumoured to be entirely produced by Kanye the duo drafted in the help of other Hip-Hop producers including; The Rza, Pete Rock, No ID, 88 Keys, Q-Tip, The Netptunes and Swizz Beats amongst others. The guest list for the album is quite short and only includes Frank Ocean, Beyonce and Mr Hudson.
The album opens up with ‘No Church in the wild’, which is a joint production from Kanye and 88Keys. The beat features an upbeat drum break an organ sample, which work well with Jay-Z’s precision lyrics and Kanye’s braggadocio rhymes. However Kanye’s obsession with auto tune doesn’t seemed to have dulled since the atrocious ‘808s and Heart breaks’ and this song would have benefitted from a more suitable bridge for the chorus instead of his dreadful auto tune singing. The next tune, ‘Lift off’ however does not improve the prospects for this album being a classic when Jay’s Missus Beyonce appears on the next track but she wasn’t the real problem on this track once again it’s the auto tune. Which is really strange when Jay-z recorded his diatribe on Auto tune a couple of years ago with the classic ‘Death of Auto tune’. The production duties on ‘Lift off’ are mainly handled by Kanye & Q-Tip and to be honest the beat is decent enough it’s the damn auto tune that forced me to hit the skip button.
The third track on the album is a bore double time effort called ‘Ni**as in Paris’ where Kanye drafts in someone called Hit Boy to help behind the boards. Jay-Z still shows that its difficult for him not perform despite the track but Kanye however seemed like he was struggling to keep up with his lyrical mentor. With the fourth track however things improve somewhat with a little helpful from Otis Reading on the Kanye produced ‘Otis’. For this track Kanye extensively samples Otis’ soulful classic ‘Try a Little tenderness’, in fact he samples it so much so that the track is listed as featuring Otis Reading. Despite the extensive use of the Otis sample on this joint its good fun and Jay-Z once again shows how strong a lyricist he is but at the same time Kanye shows that he has a long, long way to go before he is near Jay.
The Neptunes provide a signature electric soundscape for ‘Gotta have it’ which works well especially as Kanye starts the track off with a more mature verse expanding beyond his usual bragging themes. Jay backs him up well providing a strong sparring partner for Kanye to bounce his rhymes off. Put simply the unorthodox beat provided by the Neptunes works well and so does both emcees lyrics. However the next track ups the ante by bringing in the Wu Tang Grandmaster, The Rza to assist with the beat. Although the song features plenty of auto tune the maturity shown by both emcees on the song makes it a little less irrating. The lyical focus for the album is fatherhood and it so good to hear it handled so well especially as both emcees acknowledge their strengths and weaknesses as fathers and prospective fathers. The track even has some nice strings and horns towards the end.
Q-Tip joins Kanye behind the boards for the upbeat ‘That’s my Bitch’ which although obviously misogynistic works well. Kanye resorts to his usual subject matter money and women alongside Jay’s expert flow on this subject matter. The song features some nice bongos’ taken straight from Michael Viner’s Incredible Bongo Band’s version of Apache. Despite its flaws the song works well and will, I expect be a floor filler in the clubs. ‘Welcome to the Jungle’ is’nt as the name would suggest a Gun N Roses cover but a Swizz Beats produced banger where bother emcees go hard. Jay continues to show a lyrical prowess often lacking from his own releases and Kanye on this track merely drops some adlibs and not a whole verse.
The ninth song on this album is ‘Who Gon Stop Me?’ and is produced by Kanye and Sak Pase, who I have to be honest I have never heard of. The song uses an electric organ heavy beat that at times slips into double time. Kanye shouts as the chorus “This is something like the Holocaust” and Jay drops suitably hard lyrics underlining the overall sound of the beat. The next joint ‘Murder to Excellence’ is really two different songs stitched together with the first part, ‘Murder’ produced by Swizz Beats and the second section ‘Excellence’ produced by S1. On this track both emcees shine with politically inspired rhymes and both beats work well alongside these rhymes. This is one of the strongest songs on the album and the sort of thing I think Hip-Hop could benefit from; two of its biggest stars highlighting black on black murder and the lack of black representation the higher one goes up the corporate ladder. A whole album like this is what we as Hip-Hop fans deserve to show the level of intelligence and social responsibility the music can have. 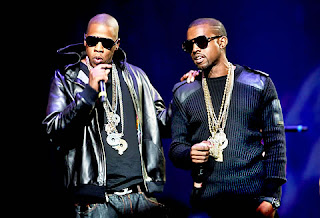 Kanye and Jay continue on from the last track with a mellower track produced by Sak Pase and although some would say this track borders on cheesy I thought it was a more heartfelt track from both artists. In fact at times the beat sounds like it could have been produced on a Casio or perhaps Binatone organ. It also features the soulful sound of Frank Ocean, which also works well. Kanye describes the early days of his career and his decisions about who he gives his beats to. Whereas Jay describes his struggle and the decisions he had to make whether bad or good. This is another strong track that highlights both artists and their lyrical skills. The next track is the Mr Hudson featured ‘Why I Love You’ which I just could’nt get with despite trying numerous times. The Lyrics are perfectly good its just the beat seems at best boring at worst annoying.
The last four track I’m reviewing are on the Deluxe Edition of the album and aren’t available on the iTunes version that was released on the 8th. The first of these tracks is ‘Illest Mo**erfucker Alice’ which to be honest is pretty much a generic 2011 Hip Hop track featuring a nice piano loop that is overshadowed by extensive organ samples and some what boring lyrics. Jay is still the stronger of the two and does have some great lines including the Charlie Murphy inspired “F*ck your Couch” line but other than that there is little memorable about this track. ‘H.A.M.’ is the next joint and is produced by Kanye and Lex Luger. It appears to be an attempt at a Dirty South styled track with some unnecessary opera like singing where the chorus should be. Neither the beat nor the lyrics from either emcees do anything to stop me from skipping to the next track.
Chicago legend No ID provides the beat for ‘Primetime’ and it features a nicely simple piano loop alongside some crisp snares. In fact I’m sure this samples a song by Orange Krush whose name escapes me at the moment. Both Jay and Kanye stay within their respective comfort zones lyrically for this track but that works with the straight up beat from No ID and helps this to be one of the better tracks on the album. The last joint on this deluxe version is the Curtis Mayfield samples Pete Rock produced ‘The Joy’. This track actually slipped out onto the internet via Kanye’s website late last year and Pete Rock has since given the same beat to West Coast group Strong Arm Steady. But it is good for such a soulfully dope track to get a proper release. The beat is slow and mellow with both Jay and Kanye reminiscing over their younger days. It’s a lovely track and works very well especially given the Curtis Mayfiled samples running heavily through the album.
Overall this is not a bad album but considering the people producing it and the lyricists its should be a better album. Jay-Z is still clearly the stronger of the two emcees but at times Kanye shows real growth. The subject matter tends to stay on the money and girls side of things however when they do move away from that area the results are strong. The beats at times seems like an attempt to capture other audiences and although this should be commended the results are often poor a perfect example being the track ‘H.A.M.’ where they seem to be trying to capture that Dirty South vibe. At other times the beats work so well especially the contributions from Pete Rock, The Rza, No ID and surprisingly Swizz Beats. Fans of both Jay-Z and Kanye will love this album and I’m sure its will sell loads but as a Hip-Hop fan for more than 25 years I am a little disappointed to be honest. If I had to rate it I would say a 6.5 out of 10 but had there been no auto tune on it that would have risen to a 7.5. 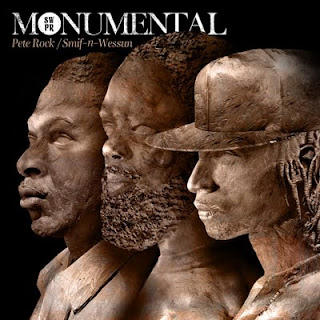