I picked this joint up from Hiphopsite.com back in late 1997 when I was buying a lot of vinyl from this site because they had such good deals and always threw in lots of cool merchandise like T-Shirts, stickers and other cool stuff.  I was interested in this 12" because of the artists featured in the group; Mikah 9, Abstract Rude, Aceyalone and the drummer of rock group Third Eye Blind Adrian Burley. Obviously I had enjoyed the lyricists work as part of Project Blowed, The Freestyle Fellowship and Abstract Tribe Unique.   This group of artists along with other musicians created a dope fusion of Hip-Hop, Jazz and Funk. 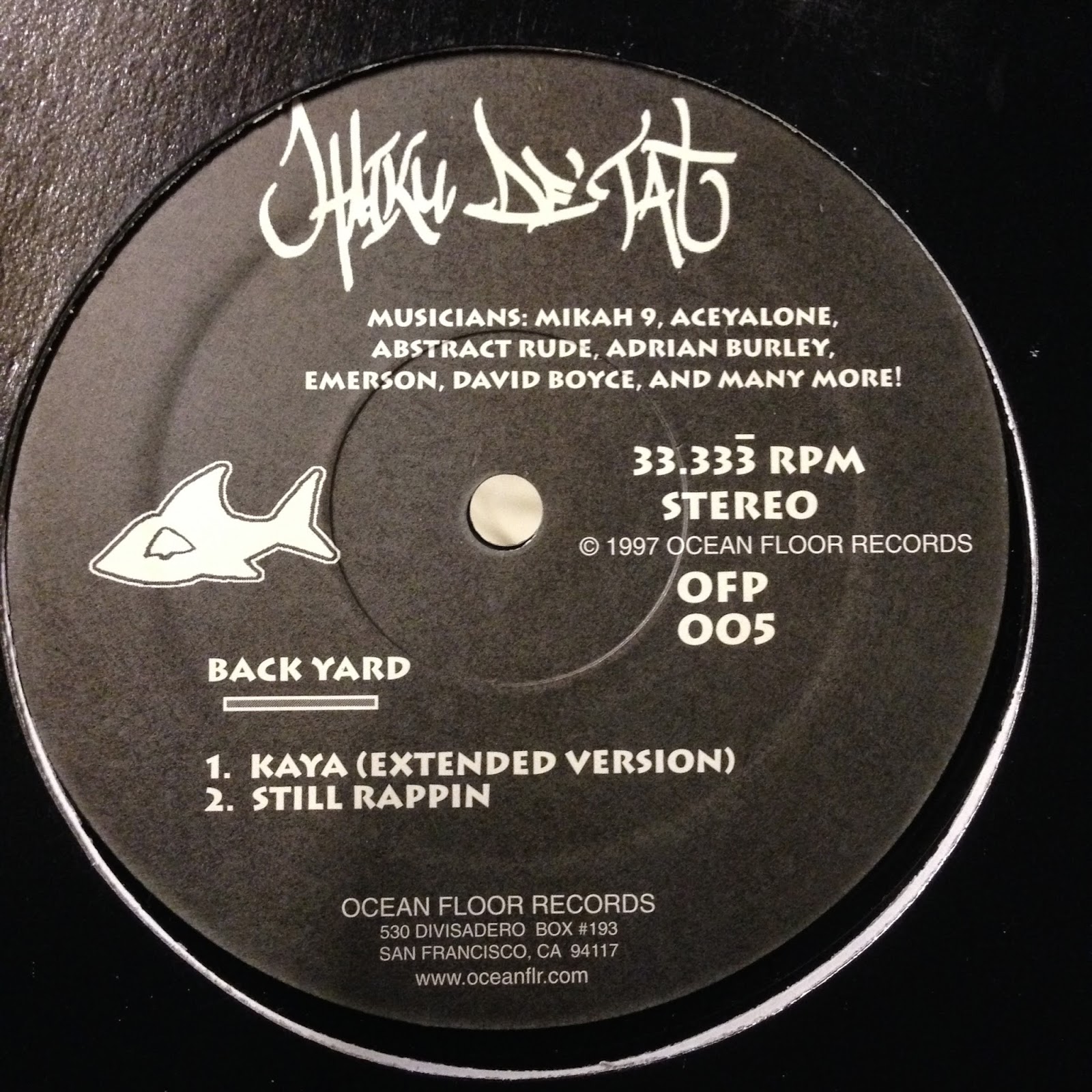 This was the first 12" released by Haiku D'Etat and they did go onto release two albums; Haiku D'Etat (1999) and Coup De Theatre (2004).  This 12" features three joints and an instrumental.  All three tracks are backed by live musicians with all three lyricists dropping verses alongside a female vocalist.
The title track is called Los Dangerous and features a nice saxophone over the Deep Cover bass-line with a guest Reggae vocalist dropping the hook.  Each emcee drops a nice little verse providing their own take on the early morning police raid which is such a staple of the gangsta rap genre.  Its a nice take on the Deep Cover classic and for good measure they throw in an instrumental too.  The B-Side is a more mellow affair with a nice bouncy joint called Kaya.  It has a nice uptempo beat with some suitable singing for the hook.  I'm sure there is some xylophone in there somewhere with some Jamaican influenced lyrics promoting an Irie lifestyle.  The second track on the B-Side is called Still Rappin' and is a very nice ode to persevering with the career choice of rapping.  Its a mellow upbeat jam with a nice chorus.  Check the Link below for the vinyl rip (apologies for a few skips)
way up to the last days we'll still be rapping 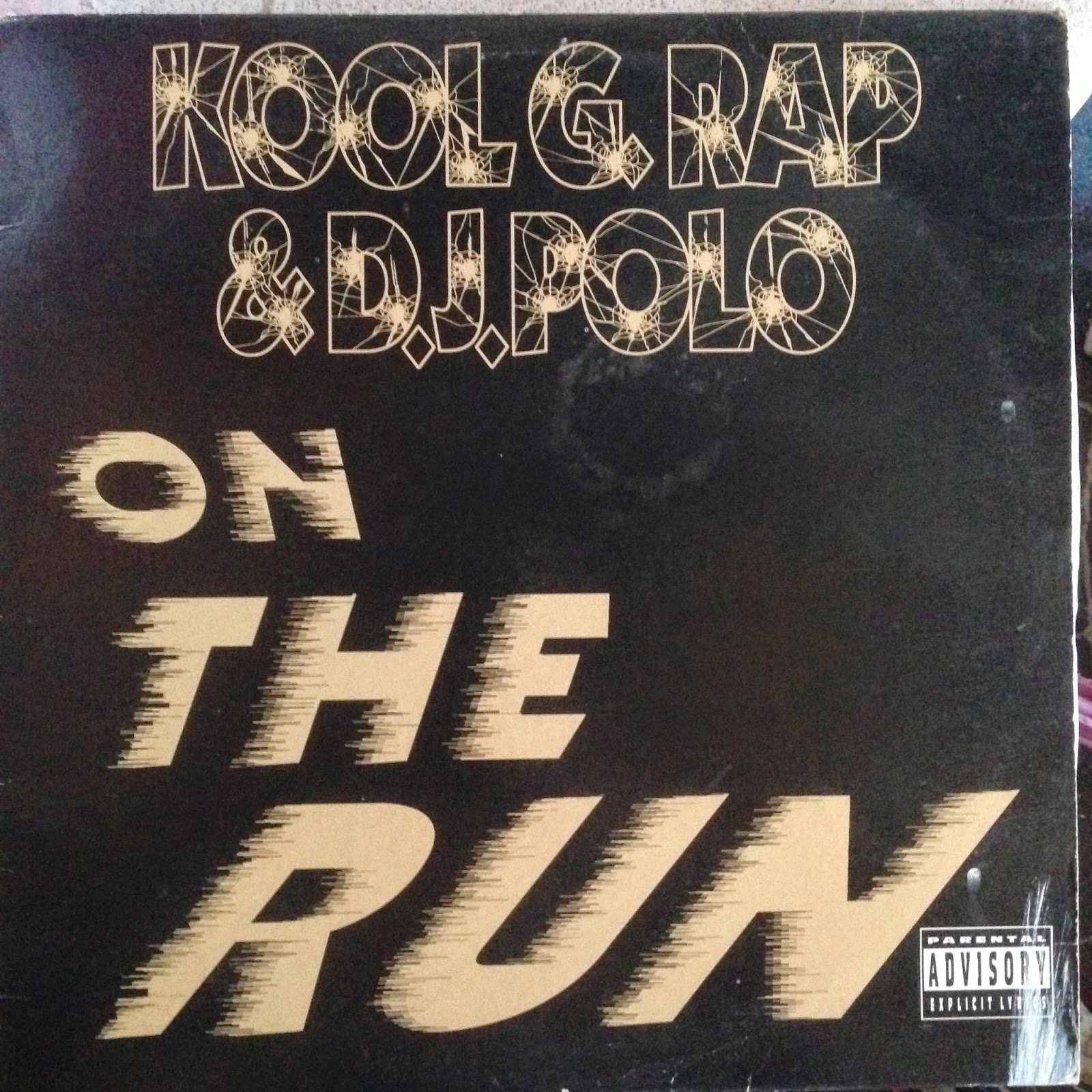 Heres is a another gem from my own collection.  This is a certified Queensbridge classic from the legendary Kool G Rap.  I honestly cant remember where I picked this up from although something tells me I may have bought it from a friend of mine who was selling off his Hip-Hop collection, possibly Diablo I'm not too sure to be honest.
Wherever I picked this up from there is no doubt this is a perfect example of Kool G Rap's Crime filled storytelling.  This 12" features two versions of the track; The Al Capone and the Untouchable version as well as instrumentals and an accapella.  Both of these are different to the album version.  There is also the inclusion of another track called Straight Jacket.  The A side starts of with a dirty version of the Al Capone mix of the track.  This version comes in at just over four minutes and features nice piano loop over the Skull Snaps drum break.  It also has vocal samples of Robert DeNiro from The Untouchables movie where he played Al Capone, hence the name of the mix.  This remix is produced by Trackmasterz as is the Untouchable remix too.
The other version of the track is the Untouchable mix which again features the Skull Snaps drum break but this time alongside a more melodic piano loop.  This creates a more mellow joint as opposed the more hard hitting piano stabs of the Al Capone mix.  We get instrumentals for both and an acapella complete with De Niro samples. 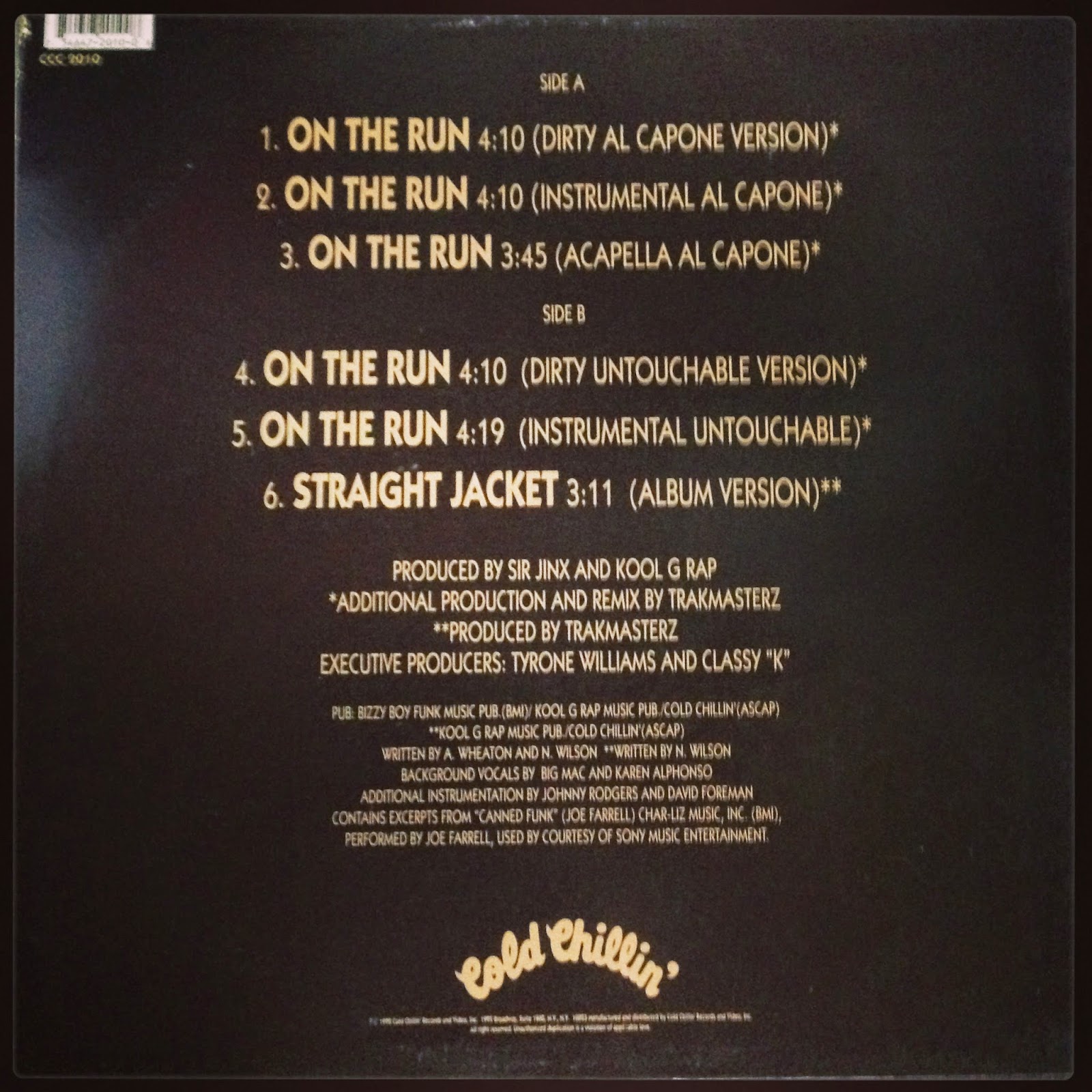 The extra track on the B-Side is Straight Jacket which is produced by Sir Jinx and Kool G Rap.  It is very similar to a lot of Sir Jinx' production at the time in particular his work with Ice Cue on AmeriKKKas Most wanted and Kill at Will.  A crisp drum and horns sample make up a mid tempo track with G Rap rhyming about his murderous slide into insanity.  What a nice guy.  Check the link below for the rip.
I got a job for the mob